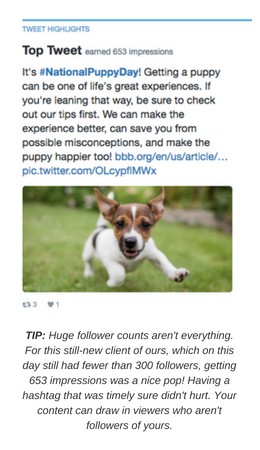 Here at jemully.com, we get a lot of mileage out of Twitter, both on our own Twitter account and on our clients’ accounts as well. That activity spawns a lot of ideas for blogposts like this one. You’ll find below some miscellaneous tips and tricks for getting more out of your company’s Twitter account.

Before we venture into some tactics, let me dispel a myth. It’s not necessary to have a huge following on Twitter to enjoy some success there. Any Twitter newcomer is bombarded with reminders that some Twitter accounts reach gigantic followings. The very big accounts are very visible on Twitter. In 2017, Katy Perry set a Twitter milestone by becoming the first person to reach 100 million followers on the site.

But the biggest Twitter accounts operate in a sphere that the rest of us can safely ignore. We need to follow certain practices that those mega-accounts never need follow.

One of those practices is called “growth hacking.” It’s the activity of building one’s following. Companies that are not household names are likely to find that their follower count does not increase very quickly unless one “primes the pump,” so to speak. At least in the early going. And you might find that it is a useful tactic that you might never want to relinquish entirely. 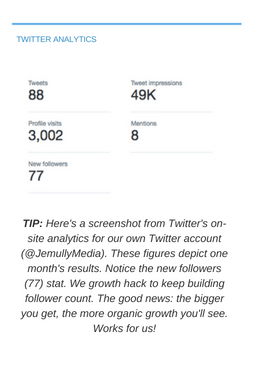 The better known an individual or organization is, the less it needs to growth hack on Twitter. I’ve noticed that many Twitter experts, those dispensing advice, have been mum on the subject of growth hacking, the practice of building one’s following. They do not often suggest a follow-first practice (the most common form of growth hacking). Maybe they feel it’s beneath them to reach out to potential connections. But it works. And it even gets employed by some Twitter accounts that are prominent-but-not-celebrity-status.

During the week I was writing this blogpost, I was followed on Twitter by Kim Garst (@kimgarst, one of the top experts on Twitter practices). It wasn’t the first time, either. I’ve not followed Kim Garst back, but that’s because she has posted more than 300,000 times, and I don’t follow back people who pour that much into my feed. But my point is this: if someone as prominent as Kim Garst (who has more than 600,000 followers), practices a follow-first strategy, then people like me probably ought to do so too. And I do. 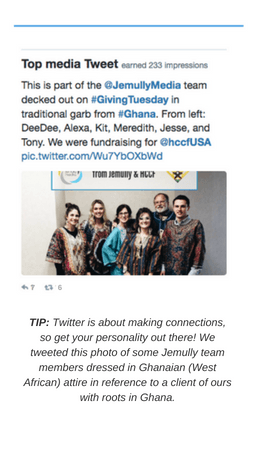 And while we’re on the subject of Kim Garst, I’ll note that when I looked at her feed just now, the majority of posts are messages that take a follower to her website, via a backlink. That is largely the strategy on Twitter.com. It’s to get people from the site to a website. Or to a Facebook page. In other words, to some platform where business (or your conversion of choice) can be transacted more easily, or where email addresses can be captured, or where (at least) online traffic and online domain authority can be built. So links are vitally important in Twitter content.

Savvy marketers look at Twitter as a place for making connections with people. That’s because people are much more approachable in this chatty platform. And connections here are easily made. In his book Jab, Jab, Jab, Right Hook, Gary Vaynerchuk says, “Twitter is a marketer’s dream come true because it allows you to initiate a relationship with your customer.” Then, for many marketers, it becomes a process of expanding the relationship with the contact, getting him or her connected on other levels as well.

But as we said already, huge followings are not strictly necessary on Twitter. They are nice to have, but we can still do well for ourselves with small follower counts. One reason why that is true is because of Twitter’s search function. If we are using the keywords that people want to track, they will find us via search. That can mean a search of just any terms or a search of hashtagged terms. On the @JemullyMedia account, a great deal (maybe half) of the engagement we get is with Twitter accounts who are not (yet) followers of ours. They find our content and like it or retweet it—or simply follow us after having encountered it.

When we say this, it’s important for you to understand that we’re not talking about your own Notifications tab on your own Twitter account. We’re talking about the Notifications tabs on your contacts’ accounts. It’s those tabs that you want to make your secret weapon. Get on your prospective clients’ radar by listing them (putting them on a Twitter list) and retweeting them occasionally, or at least occasionally liking one of their posts. Any time you engage with them, you’ll show up in their notifications tab—and seeing you there, they’ll think of you favorably.

If you don’t like filling up your tweetstream with retweets of others’ posts, then just hit “like.” But remember that retweets are really where it’s at for any serious Twitter user. A retweet is social sharing. That’s where the most good is being done—for you, when you are retweeted; and for your connections, when you retweet them. Social sharing leverages social media in a far more powerful way than mere “liking” or “favoriting” does.

Lastly, know your tools, and employ them when appropriate. Here are four to get you started.

Use IFTTT. This acronym (it stands for “If This, Then That”) is the name of a tool that allows you to connect your favorite apps together so you can get the most out of them. For instance, you can connect your Facebook and Twitter accounts, so when you like something on Facebook, you automatically share it as a Twitter tweet. You can also connect Google Drive and Twitter, so you can automatically save all your new followers in a spreadsheet. IFTTT describes itself as a “free way to get all your apps and devices talking to each other. Not everything on the internet plays nice, so we’re on a mission to build a more connected world.” Find it at ifttt.com.

Sync your LinkedIn and Twitter accounts. When you sync your Twitter and LinkedIn accounts, not only are you able to track your connections from LinkedIn and follow them on Twitter, but also you can share content across both social networks at the same time. Your status updates in LinkedIn can display as tweets on Twitter. And your tweets (all of them, if you desire) can post automatically on LinkedIn, or you can click the option to be selective, in which case only those tweets that contain the #in hashtag will display on LinkedIn. For more information, go here. 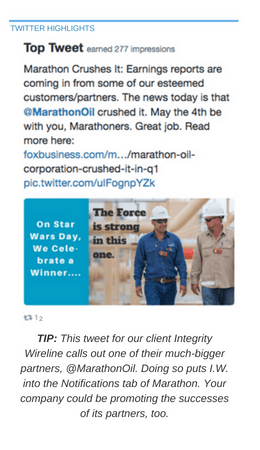 Hashtagify.com is a site that helps you find what hashtags are relevant in your field of interest. Employing the right hashtags can be a big step toward putting you in the right conversations. Twitter’s slogan is “It’s What’s Happening,” and that descriptor is particularly apt. Twitter is very much about real-time occurrences and conversations. Tapping into those exchanges is a great way to leverage the platform.

Create lead generation cards. Twitter’s Lead Generation Cards allow you to attach a form into your tweets and integrate it with your email marketing provider, which means people can sign up to your email list without even having to leave Twitter. This is an effective technique to start generating more leads.

There. These suggestions could keep you busy for a while. And if you need more, come to our blog at jemully.com/blog and search the term “Twitter.” You’ll find plenty more there to get your synapses firing! Happy tweeting!