Actor Donald Glover says it well, “If you’re on Twitter, what you’re saying is, ‘I’m important enough for you to care what I think.’ ”

True for a celebrity, perhaps, but just as true for an individual and for a business. Twitter’s slogan is, “It’s what’s happening.” There’s a subtle statement made by the fact of being on Twitter. It’s the suggestion that you’re in the moment, that you matter, that you have something to say that’s worth watching for.

With those thoughts in mind, we funnel this down to just business considerations of Twitter. With no further ado, here are seven steps to make your business’s Twitter account shine:

This is a tweet from our agency’s own Tweet feed. Twitter gives a business an opportunity to take the outside public inside its operations. You can share your values, your personality, your competitive advantages. These help break down possible resistance to your business’s appeal.

If you’re at, say, 200 followers on Twitter, set yourself a goal of getting to 1,000 followers. Give yourself a year or two. And remember that you don’t have to have huge followings to get some good out of your Twitter presence. Hashtags, for one thing, will flag and funnel prospects your way, and you can also run advertising on Twitter that will expose prospects to your offerings.

Don’t run text-only tweets exclusively. Add a photo below your tweet or, for a more professional look, create a graphic that has text embedded in it. This makes for a more shareable post. But even when you create an attractive, professional-looking graphic, think about placing a line of text with it. (That is, text that is not a part of the graphic itself.) Why do this? Because you’ll want your post to show up in people’s searches of Twitter, and unless there is freestanding text in your post, there will be no words to match up against those searchers’ search terms. Words that are embedded in (placed upon) an illustration or photo are not searchable by Twitter. If you want to share a link, then you’ll want the link to be click-able, and that only happens if the link is above the graphic, not displayed within the graphic as text. Also, you’ll want to include hashtags in some of your posts, and hashtags must be in the freestanding text that is not displayed in your graphic. See this example, below.

This tweet from our @JemullyMedia feed includes hashtags, a backlink, and a graphic.

In this example, the keywords Wix, Weebly, and Squarespace, as well as the hashtagged terms #free, #website, and #cost are all included in the hope of attracting searchers on Twitter who are interested in these topics.

Some businesses, in their Twitter embodiments, maintain a highly corporate look that is all graphics (and these generally with very refined, highly standardized design elements), with (usually) no text-only tweets. That’s fine for a major corporation, but then large corporations tend to be somewhat starched and they don’t generally present themselves as chatty, candid, or casual. If you examine the tweets by large corporations, you’ll see that they have relatively low levels of engagement. I’ve charted a statistic on some of them—retweets per 1,000 followers—and their numbers can be amazingly low. But major corporations are (mostly) not there to accomplish the same ends as small businesses, so if you’re a small business, don’t be afraid to inject text-only tweets, and @reply tweets, and shout-outs, and especially retweets of other accounts’ messages. These are all things that major corporations rarely do, if ever. But major corporations do not necessarily look upon Twitter as a customer-growth or demand-growth proposition. For them, it’s more about staying visible and looking branded across all channels. You, however, as a small or medium-sized business, want to attract potential customers. So get out there and mix it up!

There’s an additional reason for scheduling your tweets, beyond just the idea of getting many of them done in advance. There’s the pure efficiency that comes with scheduling tweets, especially when you planning to tweet the same material multiple times. In Hootsuite, for instance, one can click the “save” button to preserve a freshly constructed tweet in “draft” mode. So once you have scheduled the tweet, you simply re-open the draft and schedule it for yet another date (and so on, repeatedly, as often as needed). If a Twitter account is going to display a particular tweet eight different times, for instance, then this draft function is a huge time saver. We sometimes like to make minor tweaks on the fly each time we schedule it—changing, say, the hashtags or the textual message or the graphic (don’t forget to use graphics with your tweets when you can). 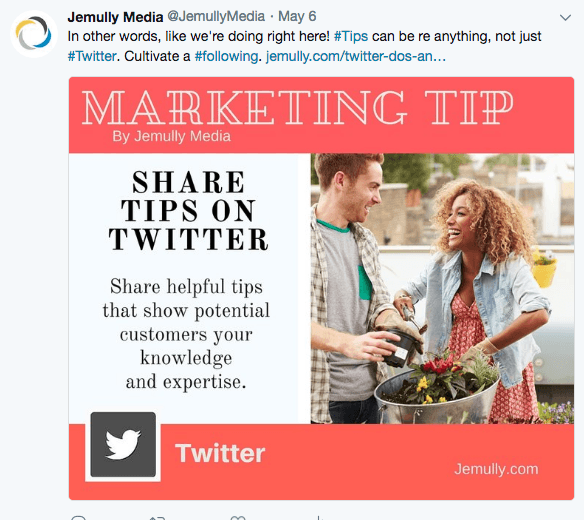 For our own company Twitter account, we’ve created Tips that we trickle into our feed. We have built some 150 such tips so far. This one links readers to a blogpost, but many such tips don’t. They are a reader service for our followers.

5. Up Your Posting Game

Of all the most popular social media platforms, Twitter is most forgiving on the issue of repeating posts. Today, you’ll find many Twitter authorities urging marketers to be quite liberal in re-posting content. Twitter is a “noisy” platform and the half-life of a tweet is a mere 8 minutes, by at least one estimate. I’ve also heard sources say it’s 14 minutes—either way, it’s probably safe to say it’s less than 20 minutes. That’s not to say that someone should repeat a post in 20 minutes. By no means. But if you want a tweet to be seen by most of your followers, then multiple transmissions of it are necessary.

How many? Again, the estimates vary, but the figures do seem to cluster around 10 (times per tweet). We advise that you spread those out. If the message is evergreen enough, then the freshness-factor is not so critical, and in such a case, one ought to spread the repetitions out at least several days apart. We’re not averse to running repeated messages on consecutive days, but if you are only going to repeat a message, say, ten times altogether, then putting weeks between transmissions is even better. We also have some tweets that run once a month for, say, a year. If the content has value and isn’t time-sensitive, make the most of it. 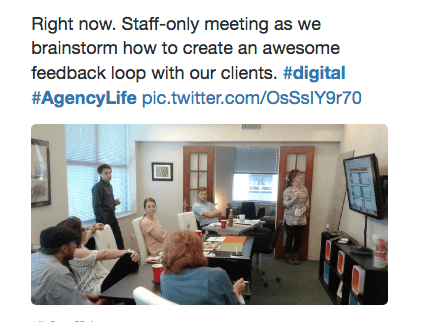 Install your Twitter app on your phone and use it to snap pix on the fly to post immediately as live tweets. This one was shared during one of our team meetings. Twitter is all about immediacy.

Remember, with social media, you are replacing and bypassing traditional media. Eighty percent of your messaging should be informative or entertaining—not sales-y. In the old world of traditional media, the media outlet itself assembled and held the audience, and marketers simply pushed sales messages, nothing more. But in social media, the account itself has to do both jobs—gathering and retaining an audience, and selling. And so, 80% of your effort ought to be dedicated to obtaining and holding a following, without pushing a sales message. We often encounter clients who, in their early days with us, voice their insistence to be constantly selling. Some of them want to see a sales pitch in every post. They’re not always comfortable with spending time or money on efforts that are not directly tied to a sales pitch. But the practice of selling constantly is at odds with building a brand that retains a following. Who wants to be sold 100 percent of the time? Social media is reciprocal, not unilateral. It helps, then, to remind others that social media is media. To support ads, media must offer something of value to the audience. It has to function as media, as well as marketing. In some capacity, it needs to do the same work that traditional media did.

For brands that reach a certain size, or that desire a certain level of activity, it may become essential to hire a digital agency or solo professional to manage social media messaging and engagement. It might be the most cost-effective thing you can do. Some business owners cannot spend the necessary amount of time to nourish their social presence when they also have a company to run. We know from experience that we can grow clients’ accounts and make good things happen for them. Any business looking to get its feet wet on Twitter can do well for itself by following the first six steps guide, but at a certain point, when you’ve started to see that growth, bringing in a little outside help can be just the thing you need to scale up your social media efforts accordingly.