On October 11 of 2018, Facebook had an exciting announcement: 3D Photos! What? How can an image be 3D image taken on your iphone? Well, if you would like to explore all the science behind this new feature, you can visit this article published by Tech Crunch. And if you would like to learn about how to create a 3D image for Facebook and a few tips, read on.

Facebook 3D is a feature that allows you to post photos on a Facebook page using a technology that conveys a sense of distance, depth of field, and separation, between the subject in the foreground and the objects in the background. To do this, Facebook 3D essentially draws from a “depth map” made by the iphone when the image has been taken using the iphone’s built-in “dual camera” function.

The iphone snaps two images simultaneously, each with perspectives that are slightly different, then, applying some custom-software enhancements, joins the imagery into one frame, giving the illusion of depth. This feature brings scenes to life, even suggesting movement, and in doing so creates “thumbstopping content.”

We shot a couple of images as an example. One of a teacup on the desk and another of one of our owners, Jesse Mullins. To view our test images, scroll back to January 24th and see the 3D pics action on our Facebook page!

Some things to note

There are a few things about this new feature that need to be pointed out. You may find them helpful.

How do you use it?

First, you must enable the feature on Facebook through your iPhone. (See the graphic on the right.) 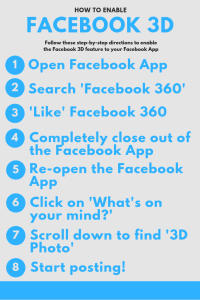 From there, you can take a picture of whatever you’d like to showcase, but as mentioned before, it must be taken on an iPhone using “portrait mode,” which is a feature included only on iPhones 7+, 8+, X, and XS. However, if you have an earlier generation iPhone, you will nonetheless be able to view these 3D photos should they show up on your Facebook timeline. Once you have taken your desired photo, you will post it using the “Facebook 3D” feature.

This feature automatically opens up a wide new range of creativity for brands because it allows them to display what they have to offer in a form far more innovative than just another 2D picture. Choosing to use this feature also helps brands display how they stay up-to-date with the newest marketing trends. With Facebook always changing their algorithm, it helps to stay up with the latest trends and directions. That being the case, using the 3D feature can be a business’s secret weapon to get more impressions, as Facebook will push interactive, innovative content towards the top of news feed.

A few tips from the 3D pros

Although Facebook 3D is relatively new and there will be small imperfections, it should not stop a business from exploring and trying new features. So, get out there, take a portrait photo, and start posting away!