HOUSTON (January 10, 2019) – The Greater Anadarko Basin, a prolific source of conventional U.S. oil and gas production since the 1950s, holds an estimated 16 billion barrels of oil and more than 200 trillion cubic feet (TCF) of gas** in un-risked technically recoverable resources in unconventional reservoirs, according to new energy research from IHS Markit (Nasdaq: INFO), a world leader in critical information, analytics and solutions.

“The Anadarko Basin has long been a major contributor to U.S. production, but it is just getting started in terms of delivering on its unconventional production potential,” said John Roberts, executive director, global subsurface operations and co-author of the IHS Markit Anadarko Basin research with Prithiraj Chungkham, director of unconventional resources. “We are now witnessing a new kind of Oklahoma land rush. But unlike what happened in 1889 when lands were opened to settlement, this time the competition is for access to the energy resources that lie below the surface,” Roberts said.

The IHS Markit analysis shows that the basin is pushing toward new all-time production highs long after conventional oil and gas production peaked in 1970s and 1980s, respectively. Horizontal drilling in the Anadarko Basin has increased sharply since 2008, and annual basin production volumes have already set new peak records.

The IHS Markit Complete Play Analysis of the Greater Anadarko Basin, Texas, Oklahoma and Kansas, USA, is the first phase of a comprehensive, 18-month-long project to model and interpret the large basin’s key geologic characteristics, including 3D geologic models of 41 plays to better estimate its remaining hydrocarbon potential.

The IHS Markit analysis provides significant advances in the accuracy and granularity of detailed producing-formation information that is historically difficult to acquire. 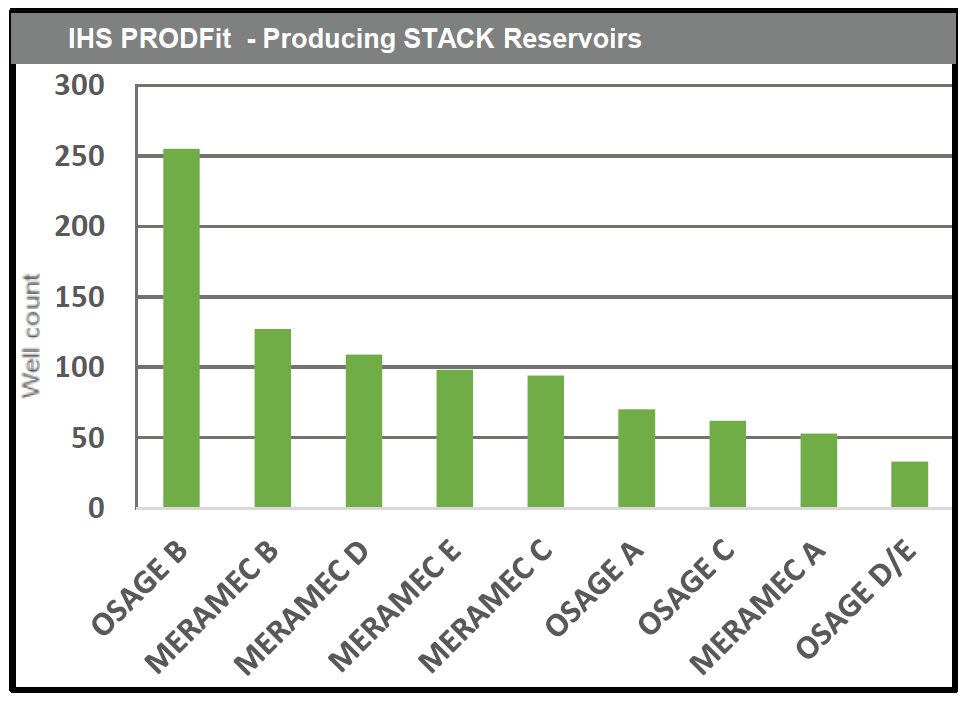 “By getting to a greater level of granularity and accuracy regarding producing formations, we change the entire view of the basin,” Roberts said. “For geologists, it’s like having a more powerful microscope.”

Among the most surprising results was the vast potential of the Simpson shale formation, which IHS Markit now believes could be one of the biggest yet-to-be developed shale plays in the United States.

“The Simpson has long been among the largest historical producers of vertical production in the Anadarko Basin,” Roberts said. “But our new analysis shows that there is also significant Simpson potential as a major driver for horizontal shale production.”

The IHS Markit analysis includes modeled and interpreted formations and benches in the STACK and SCOOP plays and has delivered them in a workstation-ready 3D format. The significant improvement in assigned formations not only adds detail and accuracy to the interpretive process, but dramatically changes the views of the basin and understanding of where future hydrocarbon potential exists.

“As it stands now, only about 20 percent of the Anadarko Basin’s STACK ‘sweet-spot’ locations have been drilled or developed,” Roberts said. “The play is still in its early stages of unconventional development. We can easily envision an additional 4,000 to 5,000 horizontal wells drilled.”

“The Anadarko is attractive because it has 41 stacked plays, which overlap in many parts of the basin,” Chungkham said. “For operators, that means multiple targets that can be accessed from one well pad.”

The analysis utilizes the IHS Markit historical well and production database that includes more than 320,000 wells, and a new proprietary tool PRODFit™, that, for the first time, enables them to leverage interpreted formation ‘tops’ data to accurately identify formations of completion intervals on 275,000 wells. The data was then modeled and interpreted using IHS Kingdom™ geology and geophysics software.